Our peach tree was laden with hard green peaches when my friends and I circled around the firepit earlier this summer. It happened to be the last day it was cool enough to abide a fire. The kids ran around playing with shaving cream and the water hose as we watched the fire and chatted. Peaches are among the tenderest of fruits; they do not travel well, so one usually sees them only in season.

Then my friends’ little girl Razmi stopped playing and came over to us. She had noticed the fallen green peaches lying all around us on the ground. She surveyed the situation and did the best she could. She selected four battered fruits. She then solemnly presented me with one. Looking me in the eyes, she said “This one is yours. You have to take good care of it, okay?”

Faced with such sincerity, what could one do but agree to take care of the half-gnawed fallen fruit? I nodded, and rubbed my fingers across the prickly velvet of the busted little peach. She then repeated the ceremony. She proceeded to my husband, and then to her parents, presenting them each with their misbegotten-looking peach, and extracting the oath to care for it.

I was dumbfounded by the wisdom of this. Razmi’s parable tells so much about how to heal what is broken. Our culture throws people away because they fall from the tree too soon. Or because they were gnawed by sharp teeth. Or because they have lain awhile,overripe in the hot sun. Our culture assumes that these people have nothing to give. We are taught to think that if the outside is damaged, that the seed is also damaged and the person is beyond hope. So we take away their supports and shame them in the classroom and in the courtroom, which makes it very difficult for them accept nourishment and grow in their best direction. The hard gnawed fruits that looked like trash to anyone else were clearly valuable to Razmi; she could see the viable seed inside each one, ready, if nurtured, to grow into a beautiful tree.

We had been living in St. Louis only a year or two, and, having come from the public-transport-free rural south, I was still leery of buses. Because of my indoctrination from my hometown, I still thought of public transportation as full of dangerous people. I sat nervously on the edge of the seat, gripping the loop handle protruding from the ceiling. The woman beside me had a number of children. She was getting frustrated because several of them needed something at once. She glanced over at me, glanced again, and said, “ You mind holding him a second?” I reached out my arms for the fat, sticky 10 month old. His diaper was wet. He was drooling on me. He had sticky crumbs on his face. And he was utterly beautiful. The fact that this woman trusted me, a random chick on a bus, with one of her most precious treasures, tore my heart open. I jogged him on my lap and he was content. He smelled like happy animals. I was a happy animal too. I had to hand him back when her stop came. She felt no need to thank me, and there was none. Her trust was thanks enough.

Earlier this summer at a hotel, I was swimming with Wolf in an almost hallucinatorily chemicaled pool (i am sensitive to chlorine). I had to escape, but Wolf needed to play and swim some more. He is a good swimmer now, but I still can’t let him play in the water alone. Desperate, I knew I had to get out of my chemical-soaked suit and wash my chemical-soaked hair. I spotted a mom sitting by the side of the pool, fully dressed to the shoes, nervously watching her clutch of  boys playing loudly in the pool. I walked up to her saying excuse me. She looked up, surprised and a little suspicious. I explained, and asked if she would watch my boy, and if she would instruct her boys to help him if need be. Her face broke into an extraordinarily beautiful smile and she agreed.

I took my shower, which was freezing because the hot water faucet was broken, then sat in the sauna for a few minutes (never a thing I envisioned myself doing in 100 degree heat) and I was utterly unworried, because I knew that Wolf was fine.

When I came back with my hair in a towel, she smiled, explaining. “Well, I made him promise me not to put his head underwater til you got back. I am scared of the water; I never learned to swim!” I told her she reminded me of my sweet mama, who won’t go in past her knees for terror of the water. So I knew she would make the best watchwoman. I shook her hand and thanked her, but I knew to her, my trust was thanks enough.

Then Wolf abruptly got out of the pool and ran to me, chlorine in his eyes, putting his face in my clothes, his freezing, chemical-covered little body using me as a towel. We waved to our friend as we left.

Later in the summer I was blessed to attend Wade Blevins’ Ignite Native American Teacher’s Conference. I met so many amazing people, so many native men and women with their souls nesting quietly inside them like serene birds, rather than like clawing predatory animals.

On the last night of the conference, we were at the Cherokee Nation Cultural Grounds for a meal prepared by the community. Little Nonni moved between Wade and a number of women in her family with anxiety-free grace. I could honestly not tell who was mother, father, grandmother, cousin, aunt. It did not matter to Nonni. They were all her family and they all loved her, and her face just beamed with it.

After dinner we began assembling around the fire for the stomp dances. Because I was the only one of the teacher-trainer group who had driven my own car, I took the more exhausted teacher trainers back to the hotel before returning for the dance.

One of the dancers was suiting up at her car, which was near mine. She was putting on what looked like heavy casts. Confused, I asked if she was hurt, and she explained that she was dressing for the dance. It takes a lot of padding to go under the heavy turtle-shell shakers, which she strapped to her calves beneath the rainbow patchwork skirt her friend had made for her. The turtle-shells are filled with river-stones, and the dancers shake them to create the perfect rhythm for the songs as they circle the fire. It is hot, heavy, and difficult art. To be a turtle dancer is a sacred call. 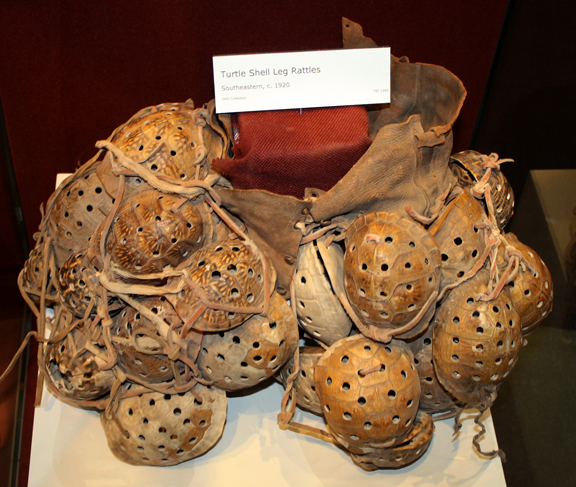 We talked only a bit, but  I learned a lot from her. “Turtles” can refer to any woman who cares for others. If there is a baby whose mother dies or is ill, auntscousinsgrandmothers close a circle of love, so that there is no gap of love for that child. Turtles carry the world on their backs. I later found out that this beautiful person had made a harder choice than becoming a turtle dancer. Given a boy’s name at birth, she chose to change that not-fitting name as an adult, thus taking the weight of the world on her shoulders. I am in awe of her.

She chose the name Ahyoka. The best-known Ahyoka is the daughter of Sequoyah, who helped him create the Cherokee syllabary. Before that, the Cherokee language was an oral language, not a written one. The world was never the same again. Ahyoka means “she brought happiness”. She sure did bring happiness to me by sharing her story with me.

When I got back to the fire, I felt ready jump in and dance with them even though I am normally shy, am an awful dancer, and had no idea what I was doing. They welcomed me seamlessly into the circle, counterclockwise around the fire. I cannot do justice by describing this honor, but I will try. The longer I stomped with them, the more the rhythm of the turtles got us all into sync. Wade, out of breath and sweating, somehow led it all, his strong voice singing the calls, dancing while Nonni clung to his chest like a heavy, comfortable monkey. Round and round we went, golden light building, and I was in awe of strength of these souls who let me see into their sacred truth.

Then it was over. I felt like I’d gotten off a boat, or off roller skates. We were milling around, hugging goodbyes, friending each other on facebook, staring at stars, Nonni decided she had to give each of the teachers one more blessing, and I was first. Riding on Wade’s shoulders as usual, she leaned down and placed a golden, perfect peach of a kiss on my right cheek. I can still feel it there. The blessing of a child who is certain she is loved by many.

Driving my friends back to the hotel, I was thinking trying to process it all. I thought back to a conversation we’d had over our frybread. Nonni had lost a batch of chicks to predators. When the next batch of chicks hatched, Nonni carefully selected a chick for each adult. She then presented the chick to its protector, demanding a solemn vow to be responsible for that one chick’s progress. One adult, one chick; she entrusted one to each. These chicks would not be devoured by predators.

Chicks, dances, peaches. They deliver the same message. Show love and trust to whoever is in your path. Love is responsibility, but a sacred, happy responsibility manifested, not only in obligation, but in in daily small actions of trust, play, and laughter. Thank you, girls.

One thought on “peaches, turtles, and trust”

Follow The Taxidermist's Youngest on WordPress.com
Join 891 other subscribers